Traitors in N.Z. Succeeded to Achieve their Goal (at least, one of them) in Only 72 Hours!! using that Christchurch Mosque FALSE FLAG

Remember our TRAITORS made it rain a lot in Queensland recently? Well, that affected the production of bananas, the price has gone up by much.


Then came tomatoes, I saw a sign in a shop saying “Due to recent extreme weather…”

Well, how many of you know that’s what our TRAITORS have been deliberately creating?

Bushfire started by WEATHER WEAPONS of the TRAITORS in the COMPANY called ‘Government’ who never use their ‘rain-making’ technology to save lives!!
https://aus911truth.blogspot.com/2019/03/bushfire-started-by-weather-weapons-of.html

Banana is a very good nutritious food, and yet this made the price up, close to $5.00/kg. And that is of course, partially due to that evil theft called ’registration’ as someone told me months ago, that those huge trucks carrying goods to shops have to pay 7 or 8,000 dollars/year to our Traitorous Fraudulent CRIMINALS.

*VicRoads - Roads Corporation the COMPANY with VicRoads’ address on DnB 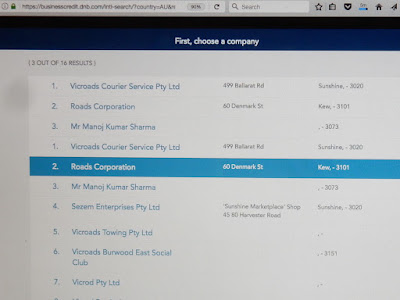 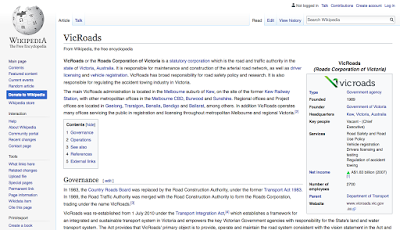 *TAC on DnB, COMPANY Search Results
*Right click and open to a new tab to have it enlarged properly if necessary. 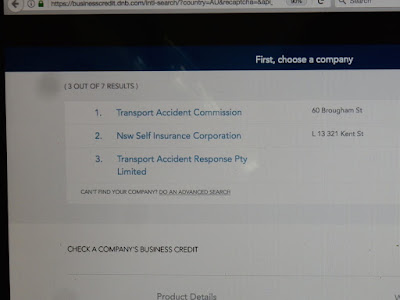 In the meantime, I came across this news video from Japan,


It’s talking about the year of 2014, and says the figure increased by 20,000 compared with the previous year, yet I’d LOVE TO KNOW the comparison with the years prior to 3/11.

but that was before we saw our FAKE politicians spreading the poison by carrying debris to everywhere to burn, and encourage the nation = people to buy products from Fukushima, which even locals do not wish to eat.

Time and time again, I hear that it’s a kinda fashion thing to go to Japan, and it just makes me feel awful to think how many more will get their life span shortened.

Anyhow, this is a sequel of

As usual, it’s SO OBVIOUS that N.Z. Christchurch shooting was a FALSE FLAG - Donald Trump talked about 49 Muslim Shot to Death in 2016!!
https://aus911truth.blogspot.com/2019/03/as-usual-its-so-obvious-that-nz.html

It’s really LAUGHABLE, this Christchurch FALSE FLAG!! No wonder why the TRAITORS want to ban sharing images from the day
https://aus911truth.blogspot.com/2019/03/its-really-laughable-this-christchurch.html

As I wrote at the end of the second article, 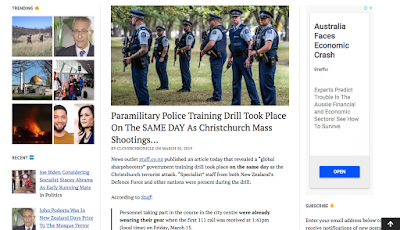 Personnel taking part in the course in the city centre were already wearing their gear when the first 111 call was received at 1:41pm (local time) on Friday, March 15.
https://www.stuff.co.nz/national/christchurch-shooting/111404324/global-expert-sharpshooters-were-training-in-the-city-just-as-the-christchurch-mosque-shooting-unfolded

Same with 9/11, 7/7, and that Port Arthur Massacre, yet another Aussie’s FALSE FLAG carried out by that TRAITOR, John Howard. And then, comes this news as you must have heard, 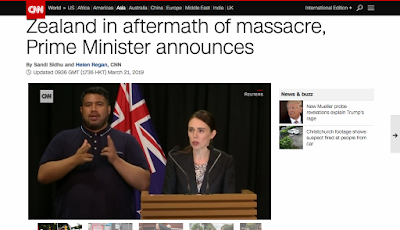 Assault rifles to be banned in New Zealand in aftermath of massacre, Prime Minister announces
By Sandi Sidhu and Helen Regan, CNN
https://edition.cnn.com/2019/03/20/asia/new-zealand-christchurch-gun-ban-intl/

Fantastic, right?
On above CNN report, when I watched the first video at the top of the page, I found it interesting when it says,

“In comparison, the US has nearly one gun per person”

in the effort of URGING AMERICANS to give up their RIGHTS that has been guaranteed by the Second Amendment!!

And it continues to talk about the procedure/requirement before the FAKE authorities give you a license, and added to say that the FAKE culprit Brenton Tarrant
“used five guns” and “He had licenses for all of them.”

Can anybody tell me how long this Tarrant guy was in N.Z. to begin with?
Did he carry those five guns on an airplane into the country?
Or did he obtained them along with all the licenses AFTER entering the country??

Please fill me in.

In the same article which has got another video which shows all seeing eye, mentioned about above Australian 9/11 called Port Arthur Massacre, the FALSE FLAG, and Kiwis gonna use the same method of “buyback scheme”

That’s yet another way of our TRAITORS wasting our money that they swindle off We the SHEOPLE.

I didn’t know that FAKE drama of 1996, still taking away guns off good & honest Australians even now. Remember, that FAKE Government’s agent Andrew MacGregor, told me that Bill Clinton who came here for a visit about the time the REAL CRIMINALS were going to throw Martin Bryant into jail for life, TRAITOR Bill said to his counterpart, Johnny coWARd,

“Well done Johnny,
with the guns.”

Along with the above news of banning certain rifles, I saw this one. 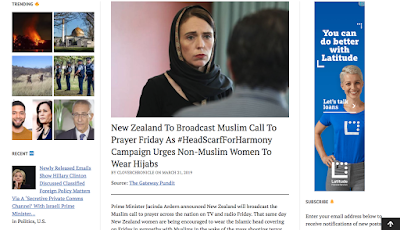 I did have a feeling that this is somewhat related with the recent atmosphere from Europe and so forth, having so many Muslims or whoever immigrants coming into the countries, and the people get divided while the locals never think about accusing their FAKE politicians who brought those immigrants but just blame the new comers.

It’s also the same with that LGBT whatever issue.
There is certainly a divide between heterosexual who don’t (or rather, didn’t) want this ‘Gay Marriage’ to be approved officially (though by all FAKE authorities), and those who have been turned into something else than what they were born to be by heavy metal toxins, other toxins and all kinds of hormones in the hair care, skin care products that Illuminati has been feeding us over the years.

Mourn over the victims of FALSE FLAG is a lie to begin with, but on top, why non-muslim women need to wear Hijabs?? though I have no intention to disrespect their culture and choice.

So I took a look at this woman, Jacinda Ardern, Kiwi’s FAKE P.M.

her father, Ross Ardern, worked as a police officer …

who, according to Japanese wikipedia

Well, we can read the English one, which says that her father, Ross Ardern became “Niue's police commissioner” in 2005, and since 2014, he’s “the High Commissioner of New Zealand to Niue”

It seems that he climbed up the ladder of CRIMINALS all right.
Also, she went to work for that TRAITOR BLIAR as a senior policy adviser.

It reveals that these Traitorous Criminals are busy training their youth to carry out their crimes internationally all right. On top, she was 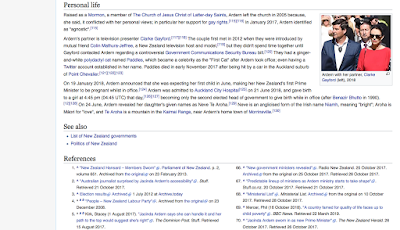 Raised as a Mormon

Reminds me of that wonderful 9/11 truther Steven Jones who ended up supporting FAKE Government’s agents, Frank Legg from Perth and John Bursill in Sydney to spread the lie of “airplane hit the Pentagon”, who was after all, a professor of University of MORMONS!! 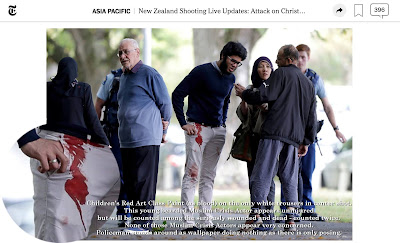 Anyway, it seems more and more sites claiming that this Christchurch drama was a FALSE FLAG like,

This Pile of “Bodies” Proves the Mosque Shooting Was a Total Hoax http://crazzfiles.com/this-pile-of-bodies-proves-the-mosque-shooting-was-a-total-hoax/

though I don’t know how many of them are seriously genuine site.
But JUST WATCH that video on above page.

On top of what the video’s telling you, notice the man at around 4:11 who stupidly walk right next to the FAKE ‘shooter’ the Crisis Actor, and compare that with, for instance, JFK.

Remember some part of JFK’s brain flew out?
He was shot by the driver, William Greer and this Muslim ‘victim’ is actually much closer to the shooter and yet, we don’t see even a single bit of his arm, let alone any bit of his top flying away at all!!

How is that possible!? Just like 9/11 WTC towers collapse done by Controlled Demolition, it happens only when the bullets were not real, DUH!!

It was really a RIDICULOUSLY laughable, dodgy operation!!

Anyway, I left a comment on above, so I’ll see its authenticity. 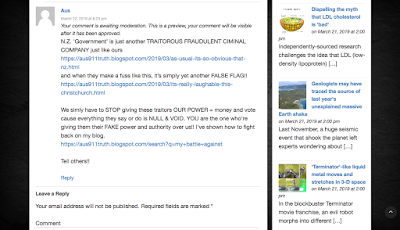 March 22, 2019 at 8:23 pm
Your comment is awaiting moderation. This is a preview, your comment will be visible after it has been approved.

You have to wonder why none of these “people” would have fled into one of the other rooms or out the window. They just lay there, waiting to be shot.

None of these “people” tried fleeing into the adjoining room, out any windows, or anything. They just waited to be shot while in a pig pile.

None of them are groaning or moving in any way

That reminds me of the ex-soldier NOT AGONIZING in the horrific pain of his legs gotten cut off in Boston FALSE FLAG
http://aus911truth.blogspot.com/2013/04/boston-marathon-bombing-is-yet-another.html

All these also reminded me of that fuss over needle in strawberries which must have been yet another TRAITORS’ FALSE FLAG in order to create this FAKE law,

as well as creating another (I think, I heard) to kick out anyone whom they recognize as a ‘terrorist’ whole THEY ARE the real TERRORISTS.

All these are just another Problem, Reaction, Solution to sell their shockingly evil solutions, however I assume there are many gullible and obedient Kiwis who gladly give up their weapons so that we cannot fight back against these TRAITORS when the day comes in the very near future.

At any rate, we’ve got to continue our battle.
Please fight back against these TRAITORS like I do,
https://aus911truth.blogspot.com/search?q=my+battle+against
and if you don’t have time nor courage to do so, be 100% sure to say the two sets of Secret,