I recently learned that Gen. Bert Stubblebine passed away last year.
You must remember him as one of 9/11 truthers with videos like,


Oh, they deleted this too.
Instead,


Then I found this video of his wife, Dr. Rima talking shortly after his death,


And I thought,
WOW!!
cause I was wondering about Dr. Carol Rosin, who spoke up at the Disclosure Project press conference,


and her story coincides with what Bill Cooper told us, who believed in UFOs and alien stories for 16 years, but stumbled upon MAJESTYTWELVE
http://www.hourofthetime.com/majestyt.htm

and realized that is the concept they publicly stated back in 1917,
http://www.hourofthetime.com/john.htm 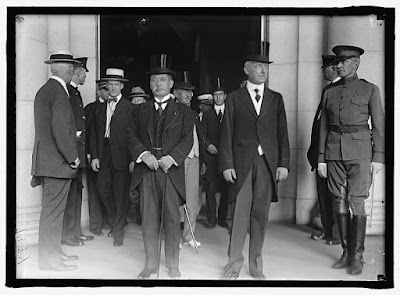 I’d love to know what this Viscount Ishii’s mission was… and as usual,

You can listen to Bill in this video
https://www.youtube.com/watch?v=ztQRElxwOBA

The plan, ladies and gentlemen, for the creation of a socialist world government is protected by an invented extra-terrestrial threat from space. The entire UFO phenomenon, and the so-called UFOlogy, which I call the UFOOLogy movement has been created to further to protection and activation of this plan. ....

That’s why I don’t buy any of alien related stories which this FAKE Government’s agent who recently approached me (you know, it’s time for them to send me someone to check upon me, the most active and GENUINE 9/11 truther in/around Melbourne, like they did over the years) tried to convince me along with Annunaki or Nibiru stories. It was laughable, and I figured out his real role in less than half a month.

Just like that story of 'our Savior will come!' which has been fooling many Christians if not all, that is a trap to make us think that somebody else will come and rescue us from Illuminati’s evil agenda ”so we don’t have to do anything ourselves” when
WE should be fighting head on with those traitors ourselves!!

Anyhow, I was glad to see Dr. Rosin still trying to spread what Von Braun told her.
And back to Dr. Rima, I listened to her in this video


I have one question to ask Dr. Rima.
Why didn’t you take him home, get a nurse who can inject whatever IV he needed to save him?

Anyway, when she said that General Bert died on his birthday, I knew what she meant that he was killed more so than she’s telling there.

Also, she tells a very interesting experience of hers with her patient back around 2002, she’s calling her a “head of state” and you should listen to that. It’s around 24 minutes into it, where this patient was talking about Great Culling of the useless eaters.

What Dr. Rima says about autism is also very interesting though it’s chilling. She says, autism is being intentionally induced to create high functioning autistic WORKERS for the global society…”


BTW, I remember some people were making a documentary series titled that very “Great Culling”. Wonder if they finished them…

And the quote of Fabian Socialist Bertrand Russell,
“The best slave is the one who believes he is free”
Below, for those who are not familiar with Fabian Society,

The Fabian Society exposed - A Wolf in Sheep.s Clothing https://www.youtube.com/watch?v=FlQ0fzABh5Y

Years ago, I saw “Fabian Society” on the rostrum in Trades Hall in Carlton.
I saw quite a few agents around there for sure.

Anyway, back to what Dr. Rima quoted, is actually depicting the dumbed down mass in our countries sadly. Yet we’ve got to wake them up urgently somehow.

I haven’t finished listening to the end yet, still have 48 minutes to go, so should do that soon when I can though I never heard the other guy, and I’ve gotta pay attention to what Dr. Rosin is doing nowadays.

And as I said, everybody should be fighting against our traitors right now! And if you don’t have that courage or time, be sure to say the Secret everyday with real emotion of joy and gratitude, and tell others to join in!!