Here in Australia, a survey is going on to see if Australians prefer to make a law to approve Same Sex Marriage officially.

Australian Marriage Law Postal Survey
The Australian Marriage Law Postal Survey is a national voluntary survey to gauge support for legalising same-sex marriage being held in Australia via the postal service between 12 September and 7 November 2017. Unlike electoral voting, which is compulsory in Australia, responding to the survey is voluntary.
https://en.wikipedia.org/wiki/Australian_Marriage_Law_Postal_Survey

I am personally not against Same Sex Marriage in the sense that we should respect their freedom of choice but at the same time, I know they were deliberately created and have been increased by the evil criminals through poisoning us over generations.

Our doctor who works outside of Medicare system cause he woke up to the fraud,

London Subway False Flag 15SEP17 - How can 18 to 29 people get injured when the bucket itself is still intact!???

On top of quite a few 9/11 documentaries, I found this fairly recently

which displays the criminals’ motive/excuse to carry out that horrendous atrocity.

Another anniversary of that shocking crime is here tomorrow. 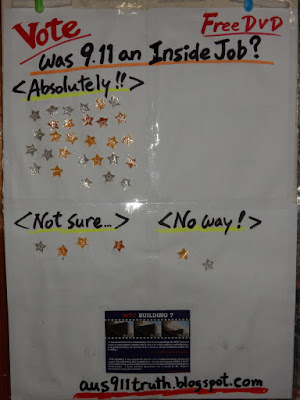 That dodgy INSIDE JOB which woke me up big time,