Warming Since 1995 Not Significant: Phil Jones 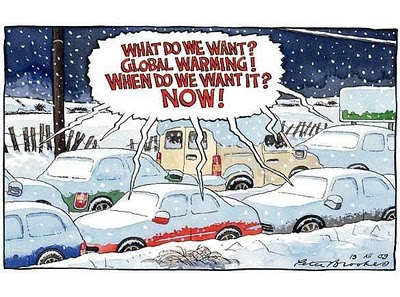 Recently, it's getting really cool to even cold occasionally for February which is equivalent of August in Northern Hemisphere...brrrrr

“PERHAPS the major environmental news of the week was a friendly interview of Phil Jones, the former head of the Climatic Research Unit (CRU), by BBC’s Roger Harabin. After the interview, a question and answer statement, with some corrections, was released by BBC.

In the interview Jones stated that although there has been a modest warming trend since 1995, it is not statistically significant. Further, there is no statistically significant difference among the four warming trends of 1860-1880, 1910-40, 1975-1995, and 1975-2009. Thus, one can not use the global surface temperature record to statistically establish that the recent warming was different from past warming periods. Many “skeptics” have been vindicated – the global surface temperature datasets do not establish a statistically defensible link between carbon dioxide emissions and the recent warming.

Jones claims the agreement between the CRU and the NASA GISS, and NOAA datasets indicates nothing is wrong. However all three may be wrong. Reports by D’Aleo, Watts, the Russian Institute of Economic Analysis, etc. strongly suggest that the three global surface temperature datasets have been heavily compromised in recent years and likely contain strong warming biases.

These revelations contradict the findings of the IPCC and US EPA in its Endangerment Finding. Since, IPCC and EPA failed to offer strong physical evidence that the recent warming was caused by carbon dioxide emissions, their claims that CO2 was the cause are not scientifically defensible by statistics or physical science.