This is the ads they put on trains in Japan, 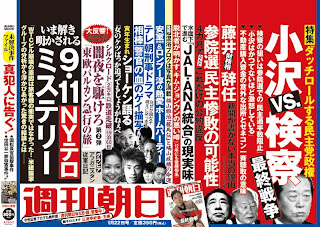 Left in white letters with black(and partially with red) in the back says:

Then in yellow letters say,

"The cause of the WTC buildings collapse was not the shock of the plane crash!" - American architects group's analysis leads to a shocking conclusion...

And its cover, Weekly Asahi January 22, 2010 issue
(They start selling earlier than the date of the issue) 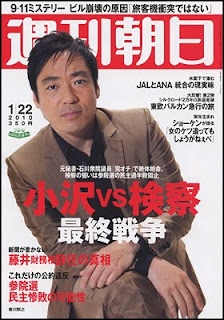 On the top, it says:

And the article itself - FOUR PAGES LONG!! 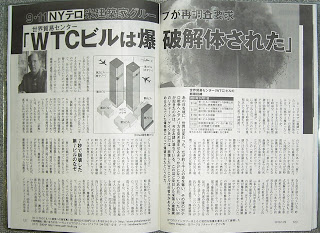 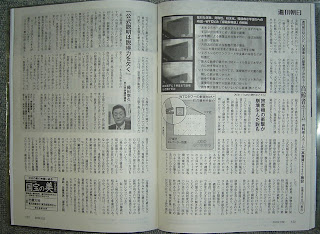 "WTC buildings were destroyed by controlled demolition"
(the second line in that bigger font!)

It explains what Richard has been lecturing very fairly, though it comments on the claim of the Architectural Institute of Japan which basically supports the official line as well as Associate Prof. Isobe of Tsukuba University who did his own research and concluded the spring back phenomenon, weak junction area(compared with Japanese buildings) and the plane crash shock caused the collapse, on about half of the third page(p122) through to the last page.

Therefore, many readers might think,
"Oh, so Japanese experts are not agreeing with this group of architects"...

Yet, Isobe himself says something positive in our views.
From its fourth page,

Mr. Isobe too, points out that the result of the official investigation bodies in the US doesn't explain the mechanism of the collapse. "Debris and pieces(of the buildings) were taken away from the site immediately and the vital evidence to figure out the cause was gone. That is provoking lots of questions" says he.
(end quote)

On top, the article includes Mr. Fujita's essay, "The Official story is not convincing" which of course supports Richard's credibility, and it ends with Richard's reply to the question, WHO could have done it:

"We don't have theories. All we have is evidence. We present the evidence we have found in front of the victims' families who have lost their precious, loved ones. And that will reveal who was responsible to this crime."

Can't wait to see the truth.
(end of the article)

Richard actually met Prof. Isobe during his visit to Japan. I heard Prof. Isobe said that there are many things he didn't know, and he also said to Richard,

"I don't disagree with you."

So, I'm actually hoping he will reach the same conclusion as Richard has in the near future. ;o)

Anyhow, THANK YOU WEEKLY ASAHI!!
Thank you those genuinely courageous journalists and the Editor in Chief who allowed this to happen!!

Please praise them for their help to our movement so that they would do more!
Weekly Asahi: wa@asahi.com

AND thank you Richard again, for your tireless work!!

*According to the data prepared by the Japan Magazine Publishers Association, Weekly Asahi's number of copies printed shows 267,914!

Simply FANTASTIC.
I bet this will wake up more Japanese. ;O)
Posted by Aus911Truth at 2:11 AM

This is a positive sign: yet another fair article in the overseas mainstream media which is balanced and rational, without the 6th grade "conspiracy theory" knee jerk nonsense that has been characterized the US and UK corporate media content on the subject.