Mr. Fujita held a lecture with Richard Gage at the National Diet of Japan.

Mr. Fujita told us that 9 politicians and about 20 secretaries were to attend.
See what happened here.

Also, Yumi told us that Weekly Asahi, , one of major weekly magazines in Japan came to interview Richard. When she reported this, they were already talking with Richard for FIVE HOURS!! 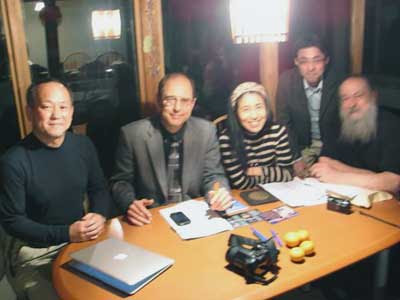 They were impressed with Richard's talk, they found there were many things they didn't know, and how convincing his talk was.

Yumi asked them if they're going to print it, they said "We came to interview because we are intending to write this" so let's wait and see!! ;O)

As I pointed out, this ‘peace activist’ and ‘9/11 truther’ Yumi Kikuchi was a horrible fraud.

At the same time, I have legitimate doubts with so many ‘truthers’ including Richard Gage whom I met in New York in September 2008 and again in Melbourne when he came over to have a lecture held by the fake Government’s agent, John Bursill who laughed at and ridiculed me when I started warning others about such very agents and chemtrails. Bursill was telling others not to associate with me because he doesn’t want people to realize other serious issues, obviously.

In other words, there are fake Government’s agents everywhere and quite often, they are the ones who start the very ‘truth movement’. They do fantastic jobs first in order to gain trust, while gathering people’s private information who are aware of such fraud/false flag operations, and eventually spread disinfo, divide the group and destroy the entire movement. They are there to control the opposition. And they use and abuse your emotion, your initial emotional labelling that you put on information you receive (Read where I wrote about what a brain doctorr wrote)

So please beware.
And yet, please know that many things those agents tell us are true.