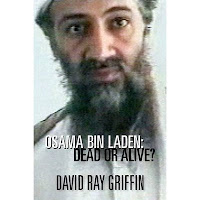 "Osama bin Laden is the world’s best-known terrorist, but how much of what we think we know about him is real? David Griffin examines this question in greater depth than any previous author. Based on the evidence, he suggests that bin Laden may have been dead for some time. If so, this means that some covert operators have been fabricating tapes to keep Osama bin Laden alive in the public's imagination."---Terrell E. Arnold, former deputy director of the US State Department Office of Counterterrorism; author of A World Less Safe

The US’s political discourse and foreign policy in recent years has been based on the assumption that Osama bin Laden is still alive. George W. Bush promised as president that he would get Osama bin Laden “dead or alive” and has been widely criticized for failing to do so. The US’s present military escalation in Afghanistan is said to be necessary to “get Osama bin Laden.” The news media regularly announce the appearance of new “messages from bin Laden.” But what if Osama bin Laden died in December 2001—which is the last time a message to or from him was intercepted?

In this book, David Ray Griffin examines the evidence for the claim—made by everyone from former CIA agent Robert Baer to Oliver North—that bin Laden is surely no longer with us. He analyzes the purported messages from bin Laden and finds that, as many have suspected, they do not provide evidence of bin Laden’s existence after 2001. This leads naturally to the question: if Osama bin Laden did indeed die in 2001, how and why have dozens of “messages from bin Laden” appeared since then?

Griffin’s meticulous analysis supports above all one simple and urgent conclusion: if Osama bin Laden is dead, the US should not be using its troops and treasure to hunt him down.

David Ray Griffin has published 35 books on philosophy, religion, and politics. His most recent book, The New Pearl Harbor Revisited, was a Publishers Weekly "Pick of the Week" in 2008.

“David Ray Griffin, one of America's most careful and judicious political analysts, specializes in subjects the mainstream media and most politicians prefer to ignore. Three cheers to him now for taking on the question of whether Osama bin Laden died some years ago and should therefore no longer be a reason for the United States to continue its war in Afghanistan. There are powerful forces both in the United States and some of its allies that undoubtedly want a clash of civilizations. Some of these forces may well have acted secretly in the past, and may still be working, to create situations, real or false, to bring about more warfare. Griffin's new book, with its evidence that "messages from bin Laden" may have been fabricated, should encourage a complete rethinking of the mission in Afghanistan." --William Christison, former senior CIA official

“This book is part of a growing body of non-fiction that illuminates the cataclysmic gap between those with power, who do as they please, and those with knowledge, who are not heard. At least 80% of what is done ‘in our name’ with our tax dollars is wasteful, lacks intellectual integrity, and does great harm to humanity both at home and abroad. Unless President Obama breaks out of the closed circle of power to connect with the kind of independent knowledge found in this book, he will remain a captive ‘front’ for the Empire Enterprise.”--Robert David Steele Vivas, recovering spy, founder of the USMC Intelligence Center, CEO of OSS.Net, and CEO of Earth Intelligence Network

The Mysterious Collapse of World Trade Center 7: Why the Official Final Report About 9/11 Is Unscientific and False
http://www.interlinkbooks.com/product_info.php?cPath=4_19&products_id=2130
Posted by Aus911Truth at 10:56 AM No comments: Links to this post

Check out the latest Reality Report we produced featuring Author G. Edward Griffin. I spoke with him about "The Creature from Jekyll Island", HR 1207, Alternative Currencies, the Federal Reserve, taking action and much more. This is one interview you DO NOT want to miss.

Posted by Aus911Truth at 5:49 PM No comments: Links to this post

Posted by Aus911Truth at 4:20 PM No comments: Links to this post

Citizen Investigation Team confront cab driver Lloyd England again about the lack of damage to his Taxi on 911 after new evidence proving the plane's flight path was north of his location which contradicts his testimony. Learn more at ConspiracyCards.com http://www.conspiracycards.com/

Cab driver Lloyd England admits the 911 Pentagon attack was planned.Citizen Investigation Team visit Lloyd's cab to further investigate the damage done from the alleged downed light pole according to the official story which contradicts more than 13 eye witnesses who state that the actual flight path of the Boeing 757 was north of the Citgo gas station.This evidence obviously implicates Lloyd as an accomplice to the staged event.
http://www.conspiracycards.com/
Posted by Aus911Truth at 4:10 PM No comments: Links to this post

On May 8, 2009, members of Truth Action Ottawa interviewed Mr. David Long, who was in downtown Manhattan the morning of September 11, 2001. Mr. Long recounts everything he saw and heard that morning, including multiple streams of molten metal pouring from the buildings before they fell, and the sounds of multiple explosions as the buildings came down.


To see the 47-minute-long full interview, please visit http://truthactionottawa.com/main/?page_id=492
Posted by Aus911Truth at 3:53 PM No comments: Links to this post

- Personal statement in support of the Political Leaders petition for a new 9/11 investigation:

"Unless U.S. and allied (including Australian) leaders move to demand independent investigation of the 9/11 catastrophe, the military sequels in Iraq and Afghanistan must be widely seen as war crimes falsely labeled as a war on terror."

WONDERFUL!!
Please tell everybody you know! ;O)
Posted by Aus911Truth at 12:57 PM 2 comments: Links to this post

I have seen report saying Indonesian Health Minister and scientists from UN and WHO stated that swine flu was made by humans, and very similar case happened back in 1976 was actually done by the US DoD! Then President Ford ordered to provide vaccination to American citizens, but that killed a lot more than the swine flu(which killed only one soldier).

This could be yet another pharmaceutical giant's fraud.

Tell me, did we ever hear any report with solid evidence that any pig died from this SWINE flu?

... while French company building a factory for Tamiflu in Mexico, that Tamiflu which made Donald Rumsfeld richer, and had killed more than 50 Japanese.

That Bilderberger's/Illuminati's 'yes man' Nicolas Sarkozy was there attending the ceremony, i.e. it's a real big deal:

When they invest 100 million Euros, how much are they expecting to get back and how?

How handy to have this 'swine flu' fuss for Tamiflu makers!?

And how many actually died from this swine flu, do you know?

Yeah, we'd better think well.
Posted by Aus911Truth at 12:16 PM No comments: Links to this post