YouTube’s censorship & REAL AGENDA behind the Melbourne’s False Flag DEC17 ~ Media LIES, as you should know

I told you before in my article dated 18DEC17, that YouTube is hiding my video

I believe that is because it COULD wake up some more sheople.
Also, they’ve been hiding my comments I post on other videos for years. Quite often, I can see them when I’m logged in, but when I log out, they disappear. I’m sure they hide them because I’m telling others about this Governments are Companies FRAUD which is giving us this great opportunity to successfully fight back and crash Illuminati’s puppets as I laid out in my articles of “My Battle Against…” series and some more.

Anyhow, back to YouTube’s censorship, more weird phenomena I saw now.
Early last year, I uploaded this one,

20 January 2017 in Melbourne CBD - Quite likely, a false flag operation of the COMPANY - 2
https://www.youtube.com/watch?v=aGqjlDL18tk

[REVISED] Another FALSE FLAG at the end of the year - AGAIN in Melbourne, Traitorous COMPANY Employees BUSY Performing FALSE car accident AGAIN, then introduce the MILITARY like (FAKE) Police in town like in NSW!!
http://aus911truth.blogspot.com/2017/12/another-false-flag-at-end-of-year.html

for the recent Flinders street car crash FALSE FLAG, but they doesn’t let me! :O( 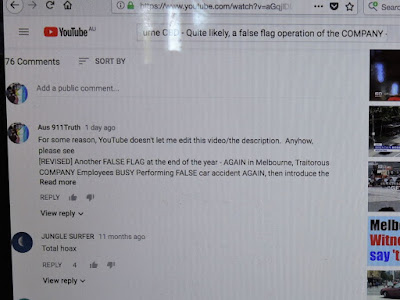 On top, right now, they’re cutting my internet connection again and again!! :O(
Anyway, I got a comment from Bolt C on YouTube via email, 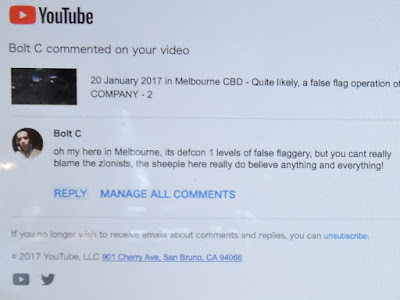 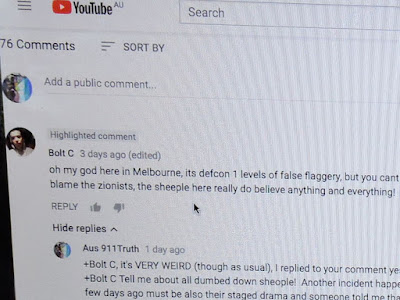 Interestingly, I could see his comment only when I used that link I got in the mail, https://www.youtube.com/watch?v=aGqjlDL18tk&lc=z23egtxgjmmixbfxa04t1aokgxputde0asljsrigm4glrk0h00410&feature=em-comments
but when I opened that video’s page, I couldn’t see it.
Isn’t that weird to begin with.

While I was there, I saw some spook writing garbage, so I replied to one of them, 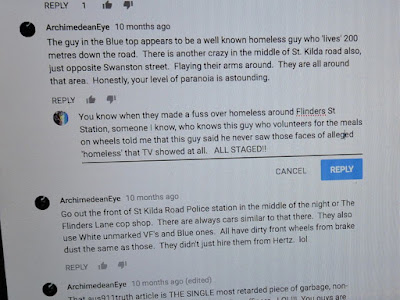 And then, I got another comment from Bolt C, 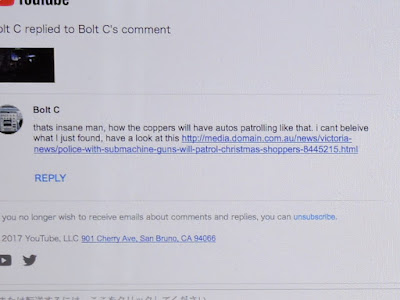 So I opened the link, but 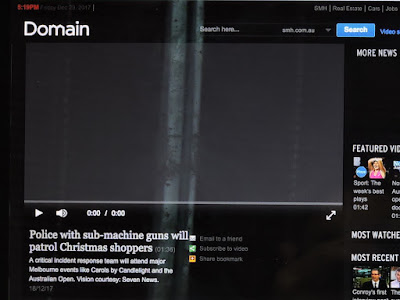 The said video was not there for me to watch. So I wrote a reply to him, 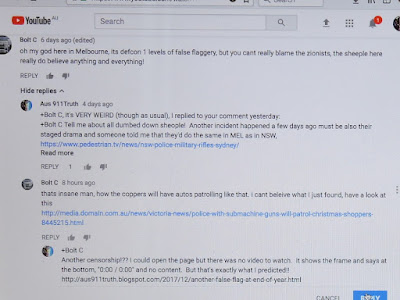 And I searched other pages of this video and found 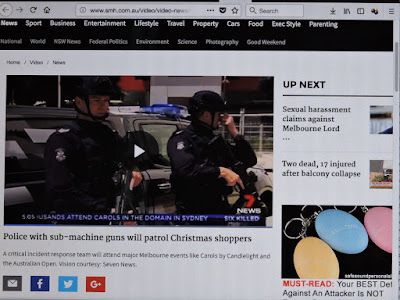 Here comes! as my friend told me.
Militarization of (FAKE) Police!!
They must have been preparing this for quite some time BEFORE their FALSE FLAG drama! 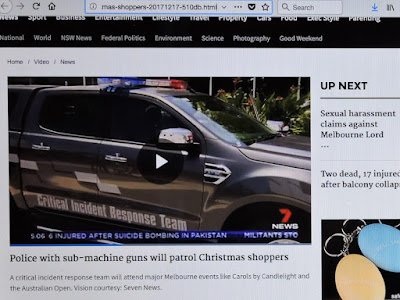 Search yourself with keywords like, “Police officers armed with submachine guns to patrol melbourne streets” and you can watch it too. A video with that title I watched (SORRY I forgot to memo it’s URL) said:

Officers will be equipped with tasers, semi automatic and sub machine guns as they patrol… A highly trained elite squad armed with submachine guns pictured will take to Melbournes streets during the Christmas period… Victoria Police Deputy Commissioner Andrew Crisp believes the heavy weaponry is necessary
Yeah, their FALSE FLAG Operation made it look like it’s necessary!! while the majority is not even paying attention to what’s happening right now, until they see those weapons themselves, perhaps. And of course, they’ll do that during this month’s Australian Open (tennis) and more and more, they’ll move forward to this (FAKE) Police state here in Australia to make sheople simply OBEY otherwise get shot to death. That’s our foreseeable future, everyone. Are you going to allow that!??

Another one is, as I mentioned before, 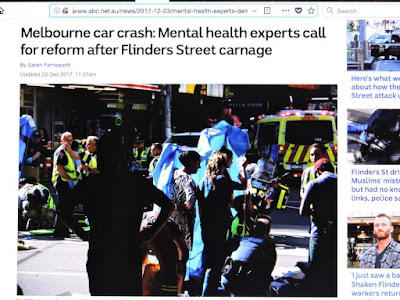 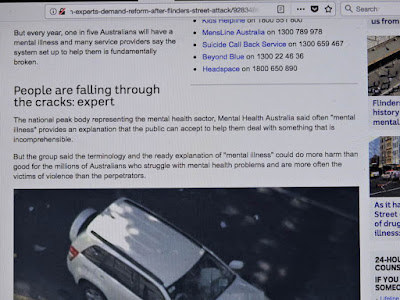 As I have been repeatedly telling you, mental illness is a WRONG description of the symptoms caused by Heavy Metal Toxins and mineral imbalance!! and they’ve been hiding this for decades, and instead of curing them by detoxing and improving their diet, they’ve been selling poisons called psychiatric medicine.
So-called ‘experts’ are all bought by big $$$ or thoroughly brainwashed.

How can I detox my son/daughter from this vaccine? - HEAVY METAL TOXINS - Reply to a father of an HPVV victim
http://aus911truth.blogspot.com/2014/05/how-can-i-detox-my-sondaughter-from.html

which contains links to learn about Heavy Metal Toxins.

Once you fully understand what this Governments are Companies fraud really means, you must be able to see various lies of these traitorous fraudulent criminals.

In other words, telling others about this fraud, you don’t even need to use the term “Illuminati” who is actually behind these puppets, because that term might make sheople immediately determine that you are just another ‘conspiracy nuts’ even though it’s our reality.

And yet another LIE I saw on the mainsteram media article. I even wonder if this is an addition to their FALSE FLAG of that Flinders Street Car Crash drama. 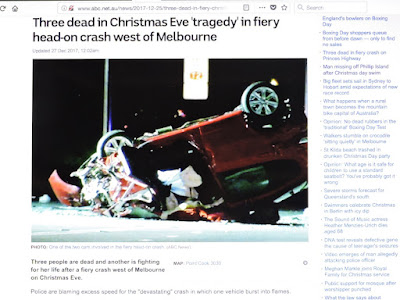 “Police are blaming excess speed for the ‘devastating’ crash…”