[REVISED] Another FALSE FLAG at the end of the year - AGAIN in Melbourne, Traitorous COMPANY Employees BUSY Performing FALSE car accident AGAIN, then introduce the MILITARY like (FAKE) Police in town like in NSW!!

Someone told me that there was a horrible accident in the city AGAIN, so I searched and it was all over the place. 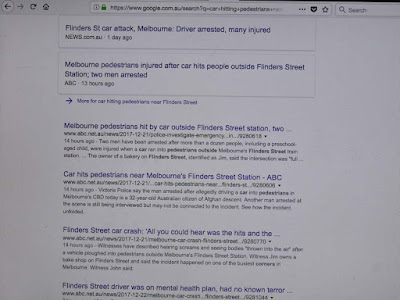 Just like the one in this January,
Melbourne CBD Rampage FALSE FLAG articles on my blog
https://aus911truth.blogspot.com/search?q=melbourne+CBD 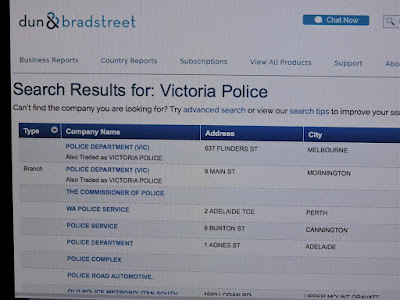 Above: Victoria Police the COMPANY on DnB.com’s Company Search

when the traitorous fraudulent Company calling themselves ’Victoria Police’ shows some big move, along with mainstream media reporting big, it’s a LIE.

With quite a few Crisis Actors at the scene, screaming, 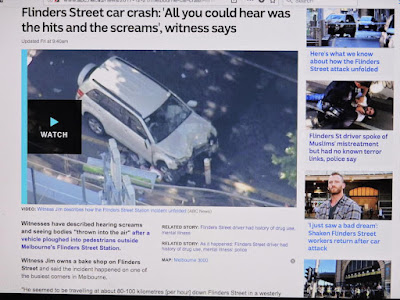 Then the culprit had a mental problem? 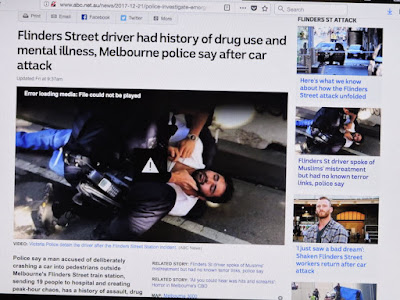 All that so-called ‘mental illnesses’ or ‘psychiatric’ whatever are caused by heavy metal toxins and mineral imbalance But they’ve been hiding such facts for decades!!

Haven’t read it yet but now I saw an article,

Peak bodies call for mental health reform after Flinders St carnage
This week's Flinders Street attack has raised questions about Victoria's mental health and drug services, with experts saying too many people aren't getting the treatment they need.
http://www.abc.net.au/news/2017-12-23/mental-health-experts-demand-reform-after-flinders-street-attack/9283486

So, THAT could well be one of the hidden motives of this FALSE FLAG.
TO SELL MORE POISON!!

And a witness “John”?? How many “John”s we have in Melbourne?
Even if it gives us his full name and the area he allegedly lives, we never know if that was a real witness or just another Crisis Actor at all. It’s SO EASY to swindle the public, isn’t it. 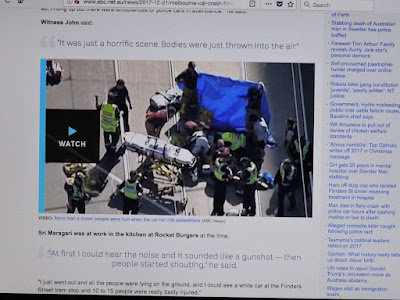 Here comes, Use and abuse our emotion tactics. 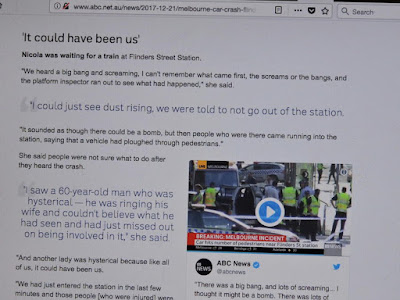 “Oh yes, it could have been us!! Therefore, we have to forget about our freedom etc, and have more powerful police force!” is what they want you to think.

And stir up our emotion FURTHER by making their own a hero! in this DRAMA. 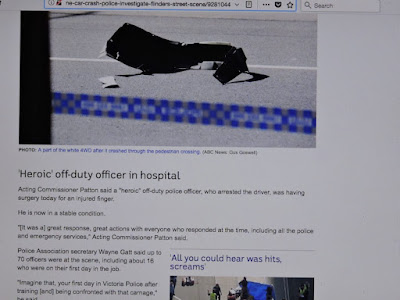 Then just like the photo in the above image, I cannot see any blood at all anywhere. 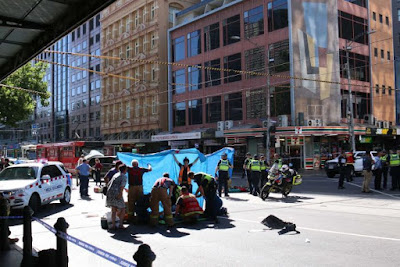 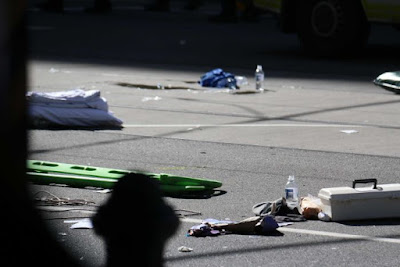 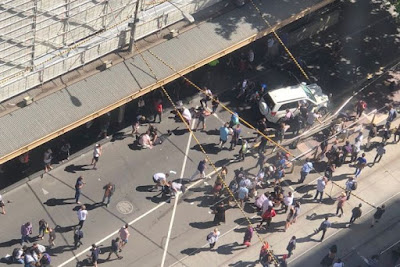 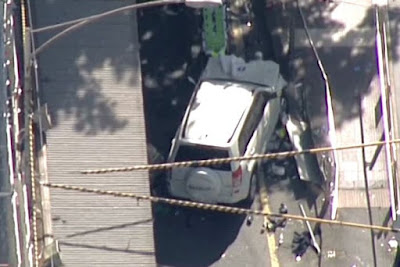 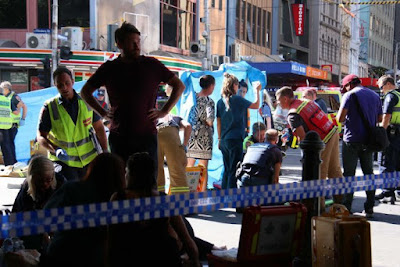 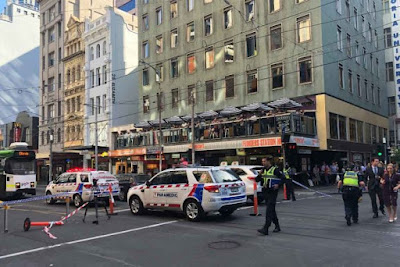 Then, another friend told me that they are going to have their FAKE police officers dressed like soldiers!! to protect Christmas shoppers… OH REALLY!? I couldn’t find any article on that, but I saw this one in N.S.W. 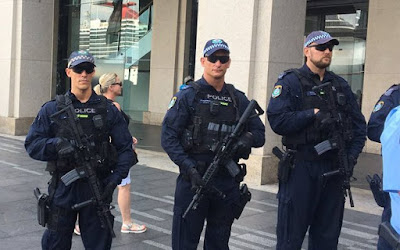 So it can come to Melbourne any day.
At least, they’re going to train more sheople to 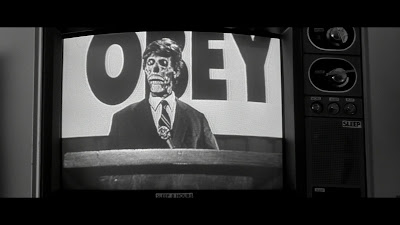 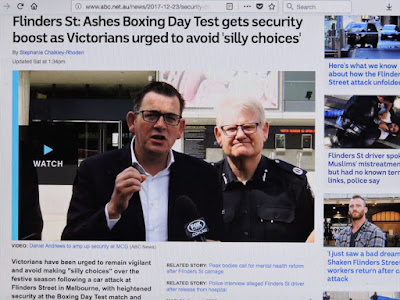 (FAKE) Premier Daniel Andrews (the traitorous liar) said,
"If it takes a bit longer to get your bag searched, that's being done for your safety…”

(FAKE) Assistant Commissioner Stephen Leane (another traitorous liar) from Victoria Police (the COMPANY) said there would be widespread bag searches and the use of security at the MCG during the cricket.
http://www.abc.net.au/news/2017-12-23/security-boost-boxing-day-test-victorians-urged-to-be-vigilant/9283890 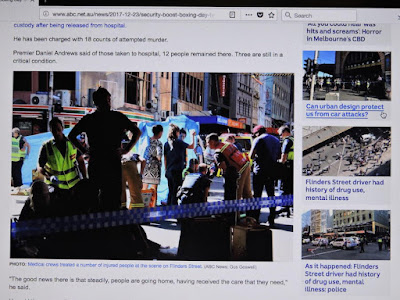 Holding a screen up, so that the REAL pedestrians in the area cannot see the fraudulent crime scene… and this below can be another hidden motive, to waste more tax money to have more construction work in the city for no real reason. :O( 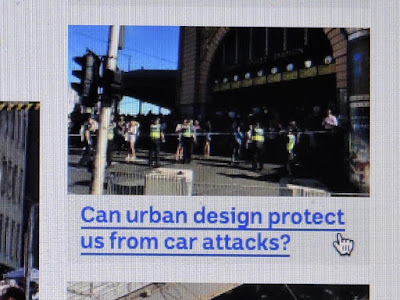 Anyhow, there’s NO DOUBT about this being yet another FALSE FLAG.
Take a look at its Wikipedia,
https://en.wikipedia.org/wiki/December_2017_Melbourne_car_attack 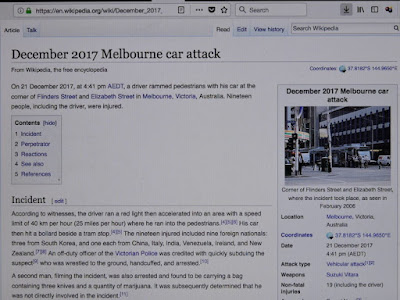 Also, look at the Coordinates, 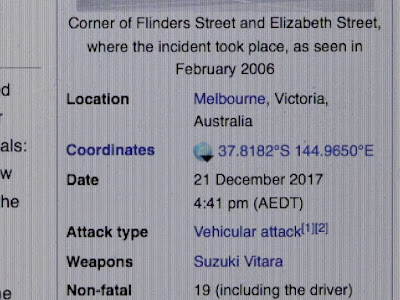 And “Non-fatal injuries 19 (including the driver)”
meaning that this guy allegedly injured 18 people
18 = of course, 6 6 6
Now, I’d say it’s CONFIRMED that this was a FALSE FLAG!!

Well, I just talked with that friend who was 100% sure that it (FAKE police officers in Victoria will be equipped with military rifles) was on the mainstream media, so they might be censoring so that I cannot find it. She also told me that people cannot drive in Sydney CBD, and when they had Boxing Day cricket match there, they fenced the venue in order to protect people from terrorists, so I assume they’ll do the same here in Melbourne!

It is clear that they’re making MORE progress to realize a
police state as I always say, they are seriously
adding the finishing touch towards the NWO and yet the majority of the citizens still deep in coma!??
It’s way over due for you sheople to wake up!!

As usual, those who woke up, please fight back like I do.
If you don’t have such courage, say below AT LEAST, everyday, as many times as you can with real feelings of gratitude and joy! ;O)

and TELL OTHERS EVERYDAY!!
Let’s turn this upside down world UPSIDE UP in 2018!!

Thanks Bolt C!
Could you read my replies to yours on YouTube?
Those criminals were hiding yours and mine, all kinds of manipulation and control. However, we've gotta fight back and stop thier NWO. Please spread my "[REVISED] Secret" cause many are so scared of the FAKE Governments and wouldn't fight back like I do. (See: My Battle Against.. series, links are on the right side which is visible when you open my blog on your computer). Anyhow, happy new year to you! and all my readers!