FrankenSkies - Chemtrails documentary - poison they spray over our head everywhere and everyday all around the world!!

I haven’t watched it in full yet, and I really hope that they don’t tell you lies about Global Warming Swindle in this documentary like Michael Murphy’s documentaries where they made it sound that these evil criminals have to spray to stop this warming which is a lie. That can be said with that ‘truther’ Dane Wigington of Geoengineering Watch. He was trying to sell the idea of getting solar panels over your roof etc, which is just another cause of health issues due to electromagnetic radiation you’d get from the converter in your house and environmental contamination due to rare metal they use.

Oh, his bio page apparently says “Dane Wigington has a background in solar energy. He is a former employee of Bechtel Power Corp. and was a licensed contractor in California and Arizona.” so no wonder!! 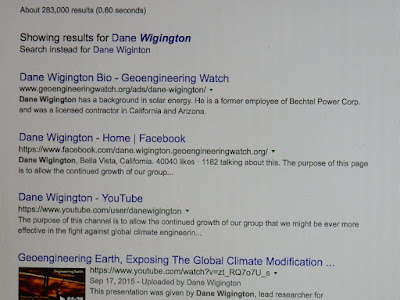 NO WONDER why he’s trying to sell solar energy!!
I really want you to check into it, that so-called alternative energy is just a another CON. Search for “dirty electricity” and “low frequency noise” from wind power on top of rare metal I mentioned above.

Anyhow, I’ll put up from the promo of the FrankenSkies


and this guy on the left in below trailer, I mentioned about him before,
http://aus911truth.blogspot.com/2011/06/global-warming-swindle-meetings-who-is.html
an evil LIAR David Keith, who said something like, “Now we’re like GOD (cause they can manipulate the weather)”…


and in full now,


They say “Please support via https://www.gofundme.com/frankenskies

and the description of the video:

FrankenSkies is an 80 minute social change documentary regarding the Solar Geoengineering/Chemtrail agenda that affects every living being on earth. The struggle of bringing awareness to this subject, despite the obstacles of a socially engineered populace and the military industrial complex with its endless resources, is palpable in this awakening truth feature.

An impeccably timed eye opening expose, the film reveals the campaign to normalize chemical cloud formations via atmospheric aerosol dispersals. Up against a normalization timetable encompassing a controlled media and an indoctrinated educational and political system, activists ask the question : Is your silence your consent?

A shocking informative film on climate engineering, frequency control and CIA manipulation, the film's narrative unfolds through a historical timeline of experimentation on humanity, bringing us to a modern day laboratory that encompasses the air we breath and dictates when and where the sun shall shine, or not... (end copy & paste)

And if you still have doubt about denying their story of global warming, watch this and listen to Dr. David Evans who was a consultant to the very (FAKE) Government’s Department of Global Warming,
https://www.youtube.com/watch?v=Di5FyndJbz0

that I uploaded it before here,
http://aus911truth.blogspot.com/2016/12/must-watch-documentary-on-smart.html

and tell others as usual!! ;o)

I must admit that your post is really interesting. I have spent a lot of my spare time reading your content. Thank you a lot! For more info: Assignment writing Help

This is very nice blog
Industrial Vehicle Parts company also provides additional services such as new vehicle sales and field service maintenance/repairs Australia wide. Please contact us if you would like more details on these services.
Buy Yamaha Golf Cart Parts in Melbourne in Australia