Just a quick note on that harassment of Blogger.com, and another video on Melbourne CBD False Flag

In my previous post, I wrote about Blogger.com altered what I wrote and showed color and font different from what I specified along with messing up the text.

If you can read HTML code to write on a webpage, you’ll see what I mean.
First I wrote a draft like this, 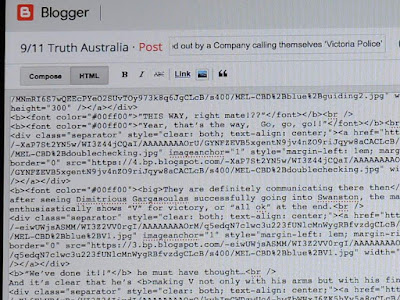 Even if you don’t know the codes, you can see I wrote
“THIS WAY, right mate!??” on the third line, and that’s what I’d say what a man allegedly named Dimitrious Gargasoulas was saying to the man with blue top, and then the latter must have been saying (the next line) “Year, that’s the way, “ (though I misspelled “yeah” there then, which I fixed later but didn’t specify color red) and yet, the draft showed, 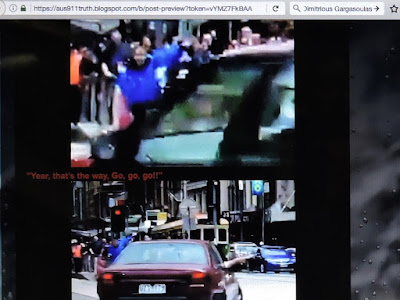 only the latter and it was in dark red. :O(
Further down, I wrote about that blonde being a Crisis Actor, 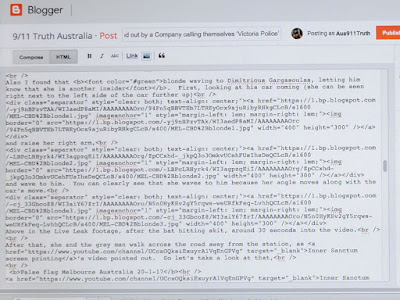 From the second line, “Also I found that blogde waving to..” 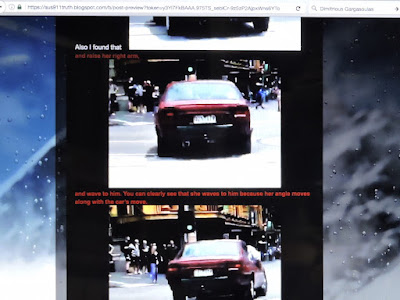 As you can see above, that part all messed up, the first part of the text almost all disappeared and that bit came AFTER the photo which is at the top in this image though I put that photo after the text, and the rest of the text came out in smaller font and color red all the way down to the bottom! even when I specified any color, it was green and not red.

And they (Blogger) changed the entire text on the right side of my blog page from regular color (white) to red and in smaller font!! It was really weird. 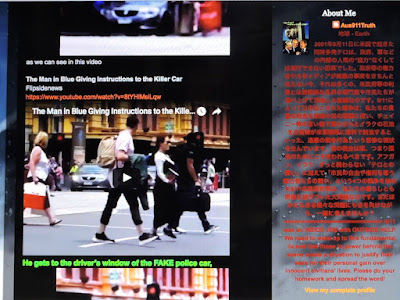 Also, I got a notification from YouTube saying that “richard mullins” commented on my video, 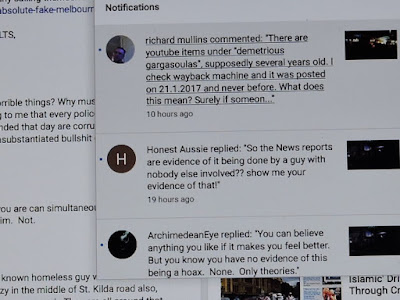 But when I went to that page, it was not there.
This happened to me before with my video on this false flag issue (i.e. what happened to HAWXTER12’s comment when she was giving me the link of a video for me to see the ‘blood’), and I wonder if the poster deleted it (can you do that??) or it’s just YouTube hiding it for some reason. Since I cannot read the rest of his comment, it could be what he wrote, the reason why YouTube hid it. Same notification I received in mail doesn’t show the rest, so I’m wondering what he wrote.

Anyhow, weird harassment here and there constantly.
That tells that the evil doers don’t like my activities and that’s GOOD! ;O)

Also, Inner Sanctum screen printing uploaded another video on this false flag operation, so I might as well, show it to you.

As I wrote in my comment on that page, I think Dimitrious Gargasoulas could have been honking the horn to warn pedestrians on top of the hazard lights, and he was not going that fast either. Yet media and others were emphasizing how scary this looks and so forth, trying to be SO hysterical.

Many people whose emotion has been already used and abused would buy such comment and just believe whatever they’re told without taking a close look.
SHAME!!

I hope readers of my blog are not like that. ;o)
Please do your bits to wake up people around you!!

Here is another video that nobody has commented on. From 1.10 onwards gets interesting when cop gets bag out boot of car and hands it to somebody, what's he up to? Cheers

Thank you for the link, Anonymous.

I'd say that bag is a First Aid kit.
Yet, we can't see any blood nor any paramedic while we see so many FAKE police officers and Crisis Actors.

It‘s actually a nice and useful piece of information. I am glad that you shared this useful
info with us. Please keep us up to date like this. Thanks for sharing.
Windows Mail Help Number Australia