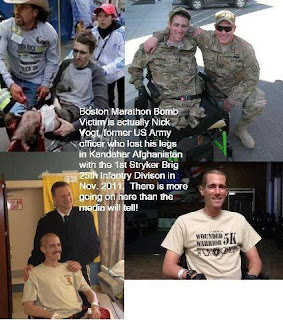 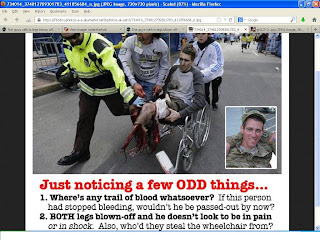 When I saw the first photo, what I immediately thought was the victim's face didn't look natural but with some make-ups. Also I wondered why he's not covered with blood, his facial expression not showing agony at all, and his injury looked fake to me.

Some say his face doesn't look like the soldier who lost his legs in Kandahar, Afghanistan, 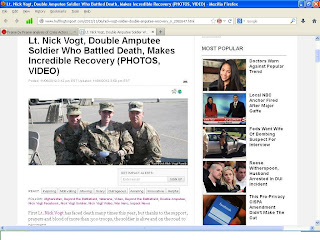 And this is Jeff Bauman, 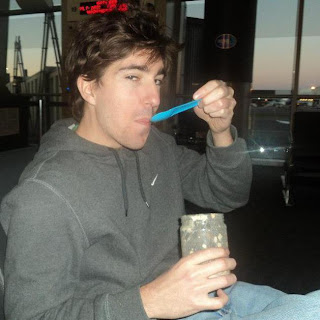 But you know they can do all sorts of things nowadays,
like when Glenn Close disguised to be a man in "Albert Nobbs" 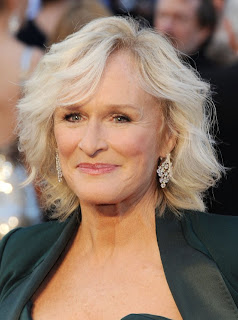 Mind you, she didn't try to be somebody else but
just changed the sex on the surface, 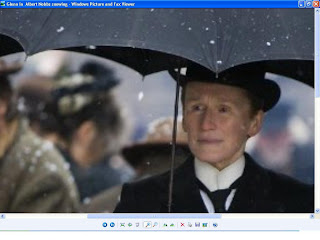 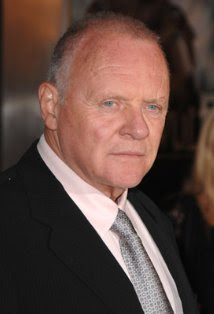 when he played Hitchcock, 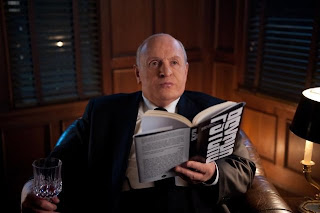 You see, the image changes a lot by special make-ups.

I was amazed some stupid comments on a forum saying his eye color is not the same. Didn't this guy know people change that by wearing contact lenses!?

What I questioned first was his hair. Jeff's hair like in above photo, seems so soft while the "Jeff in the wheelchair" looks so different. And we never heard a story of more than 300 citizens in Boston gave him their blood like Nick's comrades did to save his life, did we?

Let's compare "Jeff in Boston" and Nick though it's a bit hard cause Nick is smiling, 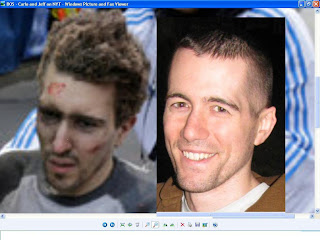 The shape of his face looks pretty identical to me.
Another one, 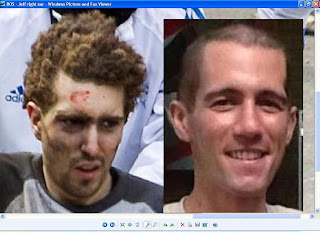 Seems they can fix Nick's left ear a bit if that gap was real, pull the sides(or shave some) of his eyebrows and eyes up, with dark color contact lenses, then VOILA! 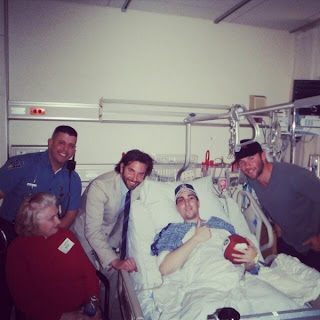 That Jeff and "Jeff at the bombing site," 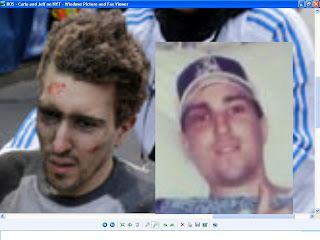 Seems the one in hospital got a bit chubby, and while he was sitting in the wheel chair hurriedly carried to ambulance, it seems he got more beard though it was a few days ealier.

Also, why did they carry him in a wheelchair when they used a stretcher to carry a victim with much lighter damage(though she was JUST FINE right before this scene)? 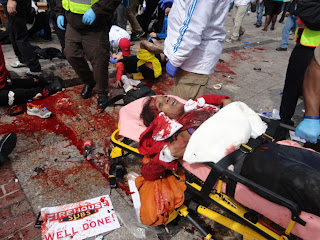 So that people would see his horrific wounds well, right?
in order to use and abuse our emotions to fool us as usual.

Recent article showed Jeff giving a gift to some other victim, 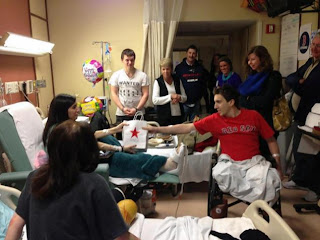 but remember, they can make all kinds of alteration to visual images, we are not allowed to have real high resolution images, and no independent/investigative journalist would be invited to such photo-opp, would they?

I bet they'll release some photos of Jeff with prosthetic limbs sooner or later, but we'll be not invited to take a close look in person.

Just in case you missed any of this, I tell you one of the first articles I saw on this case was on PrisonPlanet,

Open the above link and see it yourself, 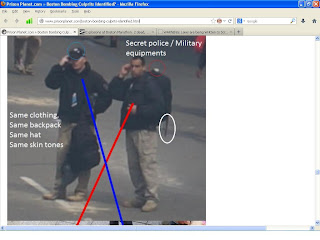 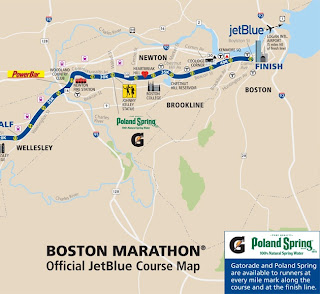 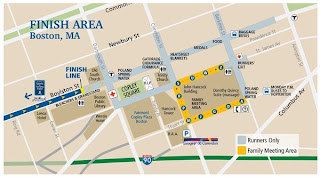 Go https://maps.google.com/ and put above address in. 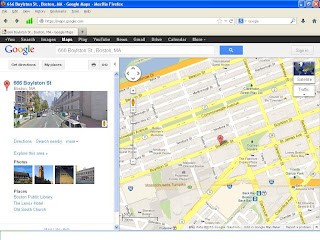 Signature of Illuminati, as usual!! 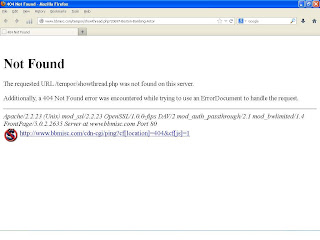 But some others copy&pasted the page.
So, go and take a close look this excellent analysis of Fist-for-Freedom

Another good page to see is
http://imgur.com/a/Nx8EU/noscript
I'd say that Suspect's injury is all fake too.

Just like that false flag with "Crisis Actors" called Sandy Hook,
https://aus911truth.blogspot.com/2019/11/lie-false-flag-brain-dead-is-hoax-weird.html
this Jeff guy has got a lot of donation,

Good business, eh?
Reminds me of all sorts of "fundraisers" to save our hospitals, our children with child cancer or leukemia, caused by horrible traitors' decisions and Vitamin K shot at birth, while they should use our tax money...though I don't think the latter ones would be able to gather the amount this Jeff guy has got, or getting.

Spread the word and un-brainwash our dumbed down sheople back to thinkers they hate!!
Posted by Aus911Truth at 8:30 PM