Ted Gunderson was an incredible individual. He was very courageous and fought for all of us, trying to wake up more and more in order to stop evil criminals who have infiltrated and hijacked the tops of many organizations in the world.

He even spoke up on chemtrails issue,

When I found out this former top of the FBI in L.A. died on 31st of July, I saw on Wikipedia,

"Ted died on July 31st 2011 from complications from pneumonia. He had stage 4 cancer." 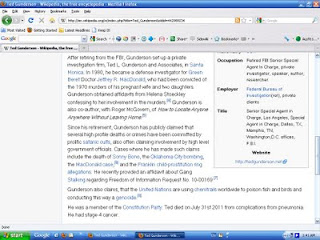 I immediately thought they probably sprayed over him just they did over me before. I wrote this to a friend in the U.S. who actually worked with Ted. And then, somebody changed that description to

"Ted died on July 31st 2011 from complications from cancer at at Cedar Sinai in Los Angeles." 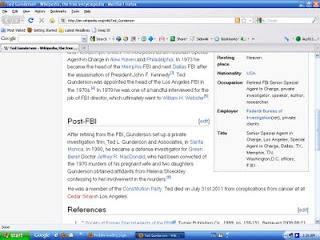 He/she(Bigbadcar) might have been in a hurry to alter it therefore made that typo(at at) perhaps.

Oh, they also deleted so many other things like “Sony Bono”, “high level government officials”, the “Franklin child-prostitution ring”, “gang stalking”, the “United Nations are using chemtrails” and the term “cult” etc so that people wouldn't check about those issues in the future.

In case you didn't know Ted, please watch the following and tell others.

I know it's too late to say but I wish he left the U.S. like some people have. It was obvious they would kill him sooner or later because with his credibility, he could wake up any genuine thinker all right.

Also I've never seen that "Heaven" for "Resting Place" on above Wikipedia page before. I am 100% sure about that Ted is in Heaven now. Yet I wonder if it's some kind of code for them. Anyhow, it is a great shame and a huge loss.