Tokyo Shinbun interviewed Chris Busby who's visiting Japan to help people suffering from Fukushima disaster. I quickly translated(a bit rough at the beginning, I skipped some like Chris' bio but not vital) the article. Please tell others. I did this especially in the hopes of stopping countries like Australia exporting uranium.

Also, I would like to express my gratitude to Chris.
Despite the risk, he decided to go there to help and assist the parents in Fukushima who want to save their children.

Through my activities for 9/11 Truth, vaccination/immunization fraud, chemtrails/HAARP issue along with that global warming swindle, Port Arthur scam and so forth, I have realized that we really need to fix our police, prosecuters, and justice system in order to change this rotten world.

Many people in Japan have already started to take action finally after all these decades, including those journalists Mr. Hirose and Mr. Akashi(Google translation) who have filed criminal charges against the Minister of Education and his men and women, some scientists who lied and minimized the risk and now I heard another citizens' group filed(Google translation) against the Prime Minister and his men for the breach of the Nuclear Reactor Regulation Law and professional negligence resulting in bodily injury.

This is exactly what we in the world have got to do!! Fix the police, prosecutors and justice system otherwise we cannot achieve our goals such as a real investigation into 9/11, 7/7, Bali, Port Arthur, Climategate and the list goes on.

Out of such a disaster and tragedy, now Japan is leading us as an example and WE MUST FOLLOW THEM!! 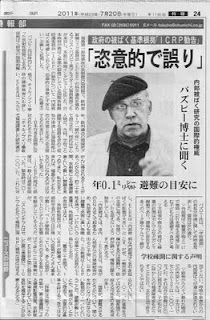 Chris Busby, criticizes ICRP advise that the Goverment uses as the basis of the radiation level standards

People around him stopped him coming to Japan due to some researchers who went to Chernobyl contracted cancer. But he decided to, thinking he "could help the children in Fukushima since I've been dealing with this difficult issue of adverse health effect of radiation for approx 20 years."

- ICRP's limits are up to 1mSv/year for ordinary citizens and 20-100mSv in case of emergency. Yet ECRR advises less than 0.1mSv/year based on its claim, "internal exposure effect is serious"...

- As for radioactive substances, you're saying strontium of beta-ray spectrum is more of a worry, which is difficult to detect by the means the Ministry of Education, Culture, Sports, Science and Technology is taking...

CB: Strontium causes a lot worse, drastically serious internal exposure than cesium. Yet it's almost impossible for ordinary citizens to detect it. The Government should do that and disclosure what they find.

- ECRR estimated and publicized the increase of health hazard such as cancer. That figure is over 70 fold of the estimate based on the ICRP's standards...

In the last 20 years, there have been a lot of evidence found to prove that the ICRP was wrong. It's a fact that many countries used the ICRP model, and yet it's another independent third institution like ECRR. They haven't been given any position/authorities.

- If we apply your 0.1mSv standard, there are a lot of spots that exceed that level even in the capital region...

CB: I'm telling you that the level the nation has to consider when determining who to evacuate is 0.1mSv. They must not set arbitrary standards due to the difficulty of evacuation or lack of monetary resources.

They will need to make detailed contamination maps, research on the health effects by a third party, and to secure water and food not contaminated with radiation.