First, read the story along with Michael's accont, and watch the video here.
Make sure to read his account cause his claim is absolutely justifiable in my eyes.

The list of airports that have got the scanner is here.

The US is to install 1,000 of them by the end of 2011!? While Italy declared to overturned their former decision to equip all of their airports and train stations with this "tyrannical madness"

The President of Allied Pilots Association says they should get the pat down rather than the scanner but let them have it behind the scene, but if it's so demeaning to pilots, ain't it so to us commoners?

No wonder, this reporter felt so intimidated and she even cried when going on that scanner,

Mke Adams of NaturalNews.com warns about the damage onto our DNA,

and listen to Rep Phil Hart of Idaho along with G. Edward Griffin.
They talk about "backscatter" which sounds really horrible.

Scanners and Backscatter Machines- the States Have Jurisdiction


Aussie Gov is planning to install this tyrannical device in our airports as this article reads at the end,

"Australia plans to rollout of the scanners next year as part of the Federal Government’s crackdown on airport security."

What a joke!
NWO governments everywhere are helping their super rich mates to rip us off further and make us sick at the same time as usual!!

I never want to use such scanner, nor "full body search," pat down using their palm even onto your genital area.

"Better to have Liberty with Danger than Peace with Slavery" 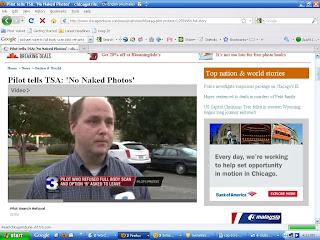 Write to your representative TODAY! and let him/her know YOUR WILL. and study the constitution! ;O)
Posted by Aus911Truth at 7:37 PM