Powerful presence of 9/11 Truthers at Anti-War March in L.A.

Yes, this is exactly what I saw when I was doing my 11th Day Action last month in Melbourne with my daughter.

We were handing out hundreds of flyers as usual, and there came bunch of Socialist Alliance type 'peace activists,' occupying the space we were using, pushing us away, putting a table and started talking to passersby.

One of them actually approached me and his first question was,

"So, do you oppose these wars?"

I couldn't believe it.
He didn't seem to expect that my answer was "yes."
Sorry but I thought he was an idiot and yet, I believe he is simply BRAINWASHED to think that we 9/11 Truthers are nothing but destruction.

He did say, "9/11 is just destruction to anti-war movement" and I could not believe that one either, but I know he was just parroting some agent who taught him that nonsense.

Why us revealing the real criminals' lies and say that the bottom excuse of these wars is actually an inside job, can be a destruction to anti-war movement!?????

It JUST DOESN'T MAKE SENSE AT ALL!!
But it seems it did to him.

Soon, another guy who seemed a bit 'senior' came over to him, pulled him aside and whispered something like, "Don't pay attention to that crazy woman" sort of things.

Yeah, of course.
If that young guy talks with me long enough to find out that 9/11 Truth has got a real powerful anti-war message than anything else, their brainwashing won't work any more.

I knew from very early stage that many of these 'peace activists' are all brainwashed and misled by spooks to eliminate us, 9/11 Truthers because THIS COULD END ALL WARS.

I was actually a regular participant of their rallies and protests ever since December 2002. My daughter joined me since January 2003. We were at all major rallies and marches. I sang "George the Killer" with a loud speaker walking around Melbourne CBD with the crowd, and so many passersby heard me sing for a long long time. And I was even their speaker, sang my songs in front of hundreds of people right across from Flinders Street station, 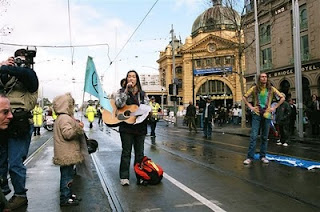 I sang this song there too. ;o)

But as soon as I started talking about 9/11 Truth, 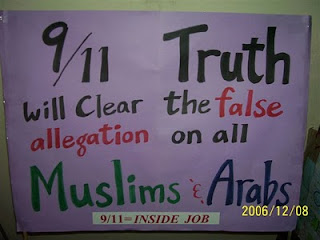 I was not invited anymore.

Despite his peer's advice, that young man spoke with me a bit more, but kept criticizing and denying what I was trying to tell him. Like when I talked about this bottom and biggest lie, he said something like, "It always happened, so what?"

I don't think he comprehended the scale and depth of the lie nor what he was mumbling back to me which made no sense.

When will these 'peace activists' who are misled by spooks ever wake up?

Well, I'm NOT holding my breath at all.
Instead, I know more citizens are waking up. ;O)

Actually, my daughter told me later, when a very stern looking business man was walking by, one of them tried to hand over their leaflet but he shook his head and didn't take it.

My daughter offered ours to him, he once signaled "no" but when he saw that "9/11 was an inside job!" on the sheet, he grabbed it!! and straight away, started reading it seriously.

WELL DONE BRUNO and all!!
You're doing a fantastic job over there.

We down here are only a few(whom I can fully trust), but we'll keep doing what we're doing. ;o)

wearechangela — March 28, 2010 — WeAreChangeLA brought the 9-11 Truth message to the Anti-War march in Los Angeles in a HUGE way. We brought our four massive 2-sided blue banners. These babies are so big, it takes five of us to carry one. We showed up early and it paid off, because we got a good spot up front.

Right off the bat, a young representative from the local chapter of ANSWER, the organization that organized this Anti-War demonstration, approached us and told us that we would have to take our banners to the back of the march. Bruno Bruhwiler from WeAreChangeLA immediately confronted him about trying to kick us to the back of the bus. He said that Answer has the permit for the march, and they can tell us what to do. Bruno reminded him that they do not have a permit to trespass on our Freedom of Speech, and went on to advise the young man to go back and tell his team that they do not want to incur the liability for trespassing on our First Amendment Rights. The young man walked away after warning us that we would have to deal with the Police.

It wasnt long before he came back with four more gentlemen, one of whom began barking at us about a mish mash of reasons why we had to go to the back of the march, and Bruno explained to him why we did not. Was I done talking?! Dont interrupt me! I am not done talking, the agitated man barked or something to that effect. Bruno says. We dont really want to hear what you have to say. One of the gentleman said to us that our message is not conducive to the message of the march, so Bruno asked them all What reason did Obama give for the wars in Iraq, Afghanistan, Pakistan and Yemen?
We dont want to have a conversation about this. The reason he gave was because of 9-11! Our message is THE anti-war message. There is no message that is more important to the anti-war movement than 9-11 Truth. You could see what looked almost like shame on their faces, and they had nothing to say in dispute.

Bruno alerts them, I need to see IDs from everyone. As far as we know you could be anybody off the sidewalk. How do we know you are actually the organizers? They refused to show IDs, and instead began stating their names, one of which is Jim Lafferty. Jim Lafferty! exclaims Bruno with a smile. Jim Lafferty is the president of the Lawyers Guild in Los Angeles, and also one of the primary aholes at the local radio station, KPFK, who has been instrumental in pushing 9-11 Truth out of the programming over the past couple of years. Jim, are you prepared to incur the liability for trespassing on our First Amendment Rights, today? Jim had absolutely nothing to say, and began taking steps back. He was then verbally accosted by a KPFK employee who kept right in his face wagging his finger as the two of them walked away. That left 2 gentleman with us, one of whom was quite level headed. The other seemed no older than 20, wearing an orange vest, who apparently was the head of security. He said to Bruno something along lines of We are not violating your rights, this is our march. Bruno corrected him, Just by talking only to us, and not everyone here today, you violated our Constitutional rights because you picked us out for our message. Well, you will have to deal with the police, he says to us. Great! Send them over. We talk to the police all the time. We love them, and they love us. Needless to say, not one police officer confronted us the whole day.

Watch the YouTube video, and you will see that our participation in the march was an extreme success. Nelson Martins made a genius move by having a table at the beginning of the march where he handed out 911 Truth signs, and stapled them to sticks, back to back. He even stapled the signs to the sticks of other signs, so folks who came with one group or another, added 9-11 Truth to their message. Throughout the march, everywhere we looked, we saw people carrying those 9-11 Truth signs! We also passed out all of our hundreds of brochures and cards from ae911truth.org. Those went really fast. Folks love those.

One final note, Cheryl Gaskill came up with the message, 9-11: What you dont know is killing people a couple of years ago at our brainstorming meeting for the banners. It turned out to be a very humble but effective message for outreach. We get lots of compliments for that one.

Peace and love to all!