Somebody on my list found a site with Bursill's brief bio written by Carol Brouillet.

Along with another fact I found on the net, I posted it on 911Blogger.com

Along with his good and close mate Ken Jenkins who graduated from Carnegie Mellon University, what Bursill who has "served in the military, in the Australian Army (reserve) Infantry for 10 years, finishing up as acting Battalion Operations/Intelligence Sergeant" according to Carol's post here, who kept denying and ridiculing me when I said there are lots of spooks among us on "What hit the Pentagon?" while others helped him to bury my posts with lots of negative ratings, what he is trying to do here is...

simply to spread the disinfo that AA77 could have hit the Pentagon just like AA11 and UA175 which actually crashed into the Twin Towers!(I now rewrote this sentence and one below to clearly say what I meant. You can see the original in the image below)

At least, he is clearly saying it was possible with the Pentagon and WHAT DOES THAT MEAN??

It means (Bursill is) SUPPORTING THE OFFICIAL LIE.

And think why he denied what I said and tried to warn other truthers when he was actually an OPERATION/INTEL Sergeant who MUST KNOW, FULLY AWARE THAT HAPPENS(that there are many agents among us infiltrating and misleading us to divide us, destroy the movement and conquer) ALL OF THE TIME!?

I wouldn't be surprised that this comment will be again buried with tons of negative ratings or even, DELETED. 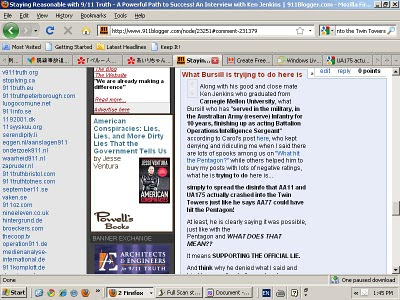 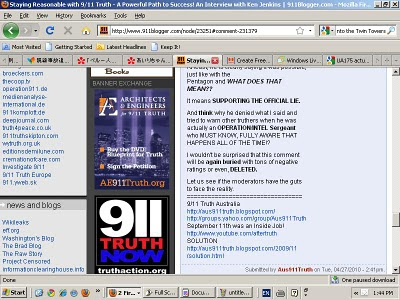 but they deleted it AS EXPECTED.

They might do the same with that bio page.
So in case, here's what it said: 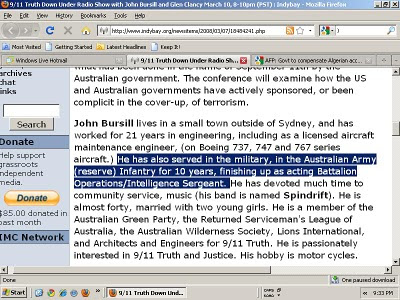 Now, I might be banned on that site... oh, I could log in!
I'll repost it though I'm sure they will delete it again.

Uh oh, I posted it but it doesn't get on the page!
They are censoring what I write OBVIOUSLY.

John Bursill is an agent and 911Blogger.com is run by agents!
Please see the facts without letting your emotion destruct you.

Anyway, please copy this, tell others and warn them!!
Here's my mail I sent to one of the moderators and he never ever got back to me. Guess he just wanted to know how much I figured out, and I did quite a bit!!

I like John just fine. I don't think he's an agent, but yeah, the pentagon thing was quite divisive and his refusal to investigate chemtrails properly is unbecoming of a truther (that said, not everyone has time to get into ALL info' out there) - he should just say that he doesn't get into that stuff.
John has encouraged me to do my own thing and he's said 'the more motivated people there are the better, I can't do everything!' so... that doesn't sound like wanting to corral and mislead the group. In this truth stuff one has to always think for oneself and be motivated and active from one's own initiative. The Sydney actions have fizzled coz John needed a reprieve. Sadly noone took up the baton in organising/directing the actions. We're all to blame, not jsut the person we see as the 'leader'. BE and DO - don't follow. That's the real problem with truthers, like it is with ALL folks 'awake' or 'asleep'.

Sorry Chris, I saw a lot more than you did to say what I say. You see people's emotion blocks their eyes and shut their ears, and make them refuse to see the reality. And as I said many a time in the past, agents HAVE TO gain your trust fully otherwise they cannot do the job.

So many things he showed me absolutely indicate what I wrote here. John Bursill is an agent. You mentioned it but still are ignoring the fact that Bursill is selling the official story about the Pentagon and the planes at WTC.

A lot of the "leaders" of the 911truth movement have created "Parameters" of belief for their followers.

None may stray from the prefabricated fence of limits made by these shepherds of the truthsheeple. Even as a person can be awoken from their slumber they can still wander about with eyes wide shut.

Jon Gold, Alex Jones, Adam Davison, Les Jamieson, Simon Shack, Bill Deagle.... the list goes on and on... Certain 9-11truth celebrities have become well known for exposing 9-11truths and more recently BETTER known for covering up certain ASPECTS of that truth entirely. Trust no-one and verify the research on everything. BUT most of all: Remain independently active about seeking truth with allegiances to no-one or no group. The Powers that be really don't like independents.

> Remain independently active about seeking truth with allegiances to no-one or no group.

Though I haven't uploaded it in English, I also found Yumi Kikuchi and Akira Doujimaru(another one of Mr. Fujita's book's co-authors which include myself) are spooks. Oh, along with her husband Gen Morita, of course!

I had doubts about Akira for some time because he's doing the same as Bursill is, and I came to above conclusion when she made me help fix their horribly incorrect translation of "ZERO." She finished it by stealing my correct job here and there with no payment nor reward made my way.

Kikuchi approached me about 20 years ago when I was volunteering for environmental issue and the Earth Day. This time, since many posters at asyra.com agreed with me, I did a bit of search further and found out that she stole more than 10 million yen when she collected donation to put a full page ad on the NY Times which came out in October, 2001. That was AFTER Bush started bombing Afghanistan.

You should be able to figure that out by looking at images I put on
http://insidejobjp.blogspot.com/2010/09/blog-post_15.html